No support to Damjanovic’s membership in Electoral Reform Committee

Podgorica, (MINA) – The Administrative Committee failed to pass the draft proposal of the Special Parliamentary Group to appoint Aleksandar Damjanovic as a member of the Electoral Legislation Reform Committee.

Administrative Committee Chair Ljuidj Skrelja asked at the beginning of the session if there was an agreement within the opposition parties on assignment of a seat to Damjanovic, which caused violent reaction by the opposition MPs.

Konjevic asked Skrelja if, when he voted for the decision to give the Democrats two seats in the Committee, he did it in line with the decision on forming the Committee, and why he failed to ask the opposition to reach an agreement on that occasion.

Skrelja reiterated that the Special Parliamentary Group was not initially interested to delegate a member to the Committee and that Damjanovic’s proposal came in late.

“Don’t think that there is no grounds for such a decision, Damjanovic has the right to be the member of the Committee, but his application was late. His coalition, the member of which he was when he entered the parliament, is presented by (Nedjeljko) Rudovic”, said Skrelja.
Longer version of article is available on a link MINA ENGLISH SERVIS 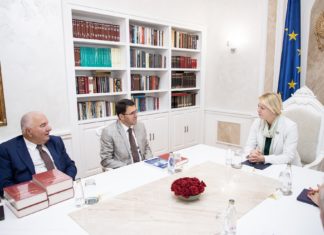