NaslovnicaEnglish NewsNo elections unless Agreement on Future is implemented

No elections unless Agreement on Future is implemented

Podgorica, (MINA) – Montenegro should get ready for a large-scale citizen revolt and boycott if the ruling DPS should refuse to implement the Agreement on the Future and the Brussels Plan, representatives of the Democrats and the Resist Movement have stated.

In the words of the Democrats, Becic and the officials of the Resist Movement have agreed that there will be no elections without a government of citizens’ unity”, which should be established no later than 1 December, and the implementation of the Brussels Plan.

The meeting underlined that the government of citizens’ unity should be formed as provided by the Agreement on the Future, meaning that one third of seats goes to the opposition, one third to the DPS and one third to the civil society.

The meeting also agreed that the Prime Minister must not come from the ranks of the current government.

“The interlocutors have agreed that if the DPS should refuse these conditions, a large scale citizen revolt and a boycott should be prepared,” the Democrats have stated. 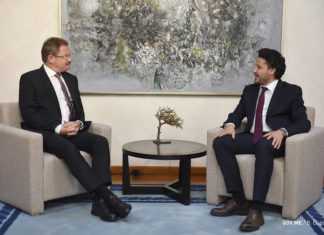