Podgorica, (MINA) – Montenegro is significantly ahead of other EU aspiring countries, it was agreed during the visit of the Montenegrin delegation to Berlin and noted that the continuation of high-quality implementation of reforms will bring to further progress in the field of rule of law.

Montenegrin delegation, led by Chief Negotiator Aleksandar Drljevic, presented the latest results in the fight against corruption and organized crime, which show that Montenegro is ready for the new phase of the negotiation process.

According to the government’s press release, it was stated that continuation of high-quality implementation of the reforms, with support of the EU partners, in particular Germany, will bring to further progress in the field of rule of law.

The representatives of Montenegrin delegation stated that national authorities show determination to direct all available resources towards achieving convincing results in areas of importance.

They expressed expectation that all EU members will recognize the latest results of the Special State Prosecutor’s office, the police administration and the Agency for the Prevention of Corruption in the field of combating corruption and organized crime, and that Montenegro will soon receive a Report on the fulfillment of interim benchmarks in chapters 23 and 24 followed by the final benchmarks.

As stated, the German side expressed possibility of signing the safety agreement as an instrument for cooperation, regarding exchange of data in fight against organized crime between Montenegro and Germany.

The meeting agreed that significant progress was made in the area of rule of law, and that additional efforts should be invested in areas where progress has not been sufficiently achieved, with the aim of achieving EU standards and a better quality of life. 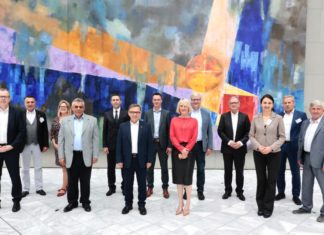